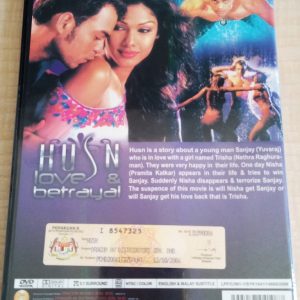 Sanjay (Yuvaraj) is a happy young man in love with Trisha (Nethra Raghuraman), who also loves him very much. Everything in the universe is going perfect for the two lovers, when suddenly into their dream world Nisha (Parmeeta Katkar) crashes in. After that nothing remains the same for anyone everything changes. Nisha develops a dark, obsessive love for Sanjay after a night of love making. Sanjay takes that night as a one night stand when Trisha has gone to Paris. But Nisha is not willing to let him go. She tries her best to win over Sanjay but Sanjay is not interested. Her craving for him becomes obsessive and pathological. She begins to show her true colors. She gets psychotic. She has also committed a murder in the past.

She starts intimidating Sanjay and begins to destroy all things dear to him, beginning from his pets to his dearest friend Chintu (Saurabh) and will not rest till she has Trisha out of her way dead or alive. The pressure keeps mounting. Sanjay finds himself in a no win situation. On one hand is the certainty of losing Trisha if she finds out the truth about Nisha. And on the other, Nisha’s threat to kill Trisha is chillingly real. Life has becomes hell for Sanjay.

Then as suddenly as Nisha had entered Sanjay’s life, a shadow from her ugly past returns to haunt Nisha. Harsh (Sameer Dharmadhikari) abetted her in the murder of an underworld goon who was carrying a fabulous amount of money. Harsh volunteered to get rid of the body and while he was gone, Nisha disappeared and along with her, the money. And now Harsh has traced her and wants his share. As the tension rises for Nisha, she terrorises Sanjay more mercilessly, his mind and his nerves are at breaking point. It is time he took drastic steps. He is on fire and will kill to rid his life of Nisha’s evil being and Harsh’s sadistic presence.

Sanjay must get his life back, his love back but will he be able to? Bullet For My Valentine Live Rock Am Ring 2006 Music DVD BOB MARLEY And The Wailers Live In London DVD Bullet For My Valentine Live At Rock Am Ring 2013 DVD