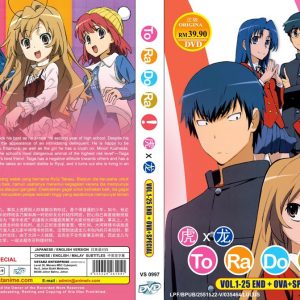 Ryuji Takasu is frustrated at trying to look his best as he enters his second year of high school. Despite his gentle personality, his eyes give him the appearance of an intimidating delinquent. He is happy to be classmates with his best friend Yusaku Kitamura, as well as the girl he has a crush on, Minori Kushieda. However, he unexpectedly runs into “the school’s most dangerous animal of the highest risk level”—Taiga Aisaka—who just happens to be Minori’s best friend. Taiga has a negative attitude towards others and has a habit of snapping violently at people. She takes an instant dislike to Ryuji, and it turns out she is living in an apartment facing Ryuji’s house. When Ryuji discovers that Taiga has a crush on Yusaku, and Taiga finds out about Ryuji’s affections towards Minori, they make an arrangement to help set each other up with their crushes.